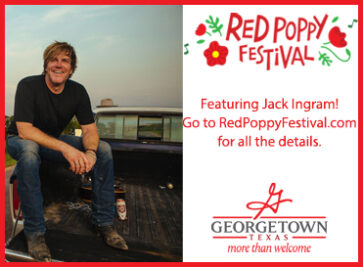 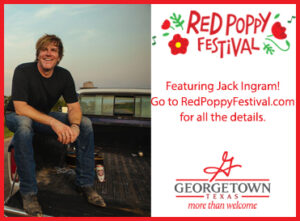 Join us on April 22-24 for the 2022 Red Poppy Festival! The Red Poppy Festival has hosted a who’s who of artists and bands throughout the last few decades and this year promises to be better than ever. With live performances, all three stages will be heating up and turning out the good time vibes. The fun starts blooming on Friday evening when artisans set up their wares, fresh smells waft from food vendors and live music by Dysfunkshun Junkshun starting at 7 p.m. Plan to stroll the Square and dance right into your Friday night>.

The festival really blossoms on Saturday when it kicks off with the Poppy Parade and Car Show.  Once the engines turn off, the day is yours to make.  Kids can get crafts at the Fun Zone and everyone can feast their senses on fine arts, tasty treats and live music all day, featuring Jack Ingram later Saturday night! Get ready for a beautiful Saturday>

There’s nothing better than a Sunday Funday, except for one spent at the Red Poppy Festival.  Wind down the weekend with one last wander through the artisan market and raise a toast of local fare to the smooth sounds of a well-played weekend. Savor the fun on Sunday>

Go to RedPoppyFestival.com for the complete schedule and all the info! 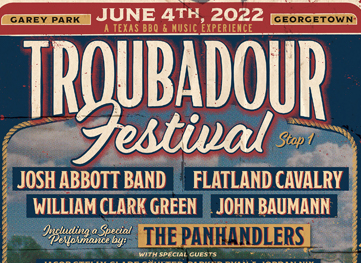 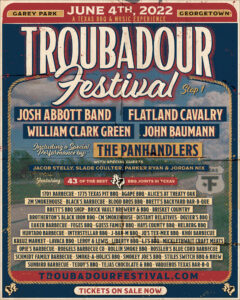 Troubadour Festival is a multi-location Texas BBQ & Music experiential festival that pays homage to the traveling songwriter and the worldwide popularity of the Texas barbecue scene. Troubadour Festival brings the two together for the largest barbecue festival of its kind, now happening three times in 2022!
Join us on Saturday, June 4, at Garey Park in Georgetown, Texas, for the first Troubadour Festival happening in Central Texas! Georgetown’s inaugural Troubadour Festival is bringing together 43 of the best and most celebrated barbecue joints from across Texas, with more than half being from the Central Texas region. They’ll be joined by some of the biggest names in Texas Country Music, which also features one of the year’s most unique lineups.
Josh Abbott Band and Flatland Cavalry are co-headlining Troubadour Festival, and they’ll be joined by William Clark Green and John Baumann. These four also make up the powerhouse supergroup The Panhandlers, who will also be taking the main stage during the festival for a show unlike any Texas has seen yet.
Tickets go on sale to the public at 10:00 AM Friday, March 18 at troubadourfestival.com.
RSVP, invite your friends, and we’ll see you in Georgetown! 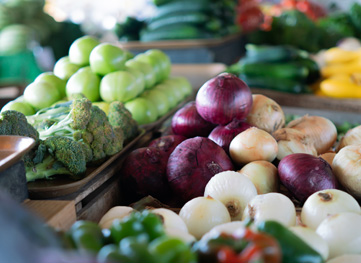 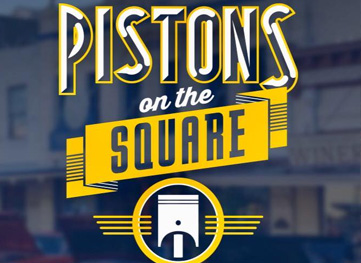 Pistons on the Square is a gathering of antique, classic, muscle and late model cars and motorcycles on the Square in Georgetown Texas the third Saturday of every month, 8-10 a.m. and is free to attend. To learn more, please go to facebook.com/pistonsonthesquare. 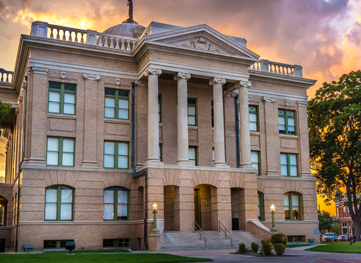 Enjoy an entertaining tour while learning some of the rich Williamson County and Georgetown history! The Williamson Museum provides free guided tours of the beautiful historic Williamson County Courthouse. Tours are Fridays beginning at 1:30 p.m., 2:30 p.m., and 3:30 p.m.  Plan to arrive at the museum a few minutes early and you may want to call ahead to confirm tours as they are subject to change, 512-943-1670. 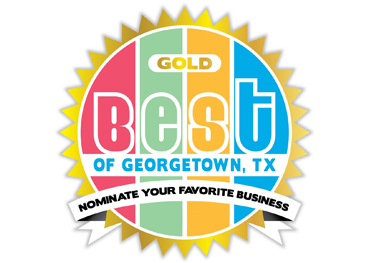 Congratulations to the winners of the 2021 Best of Georgetown Contest:

Best Place to Volunteer/Give
1. The Caring Place
2. BiG Cafe and Shop – Brookwood in Georgetown
3. R.O.C.K. – Ride On Center for Kids

To view all nominations in the 2021 Best of Georgetown Contest, CLICK HERE.

We welcome all 2021 Best of Georgetown award recipients to pick up their award certificate and decal from the Georgetown Visitors Center located at 103 W. 7th St. Open Monday – Saturday from 9 AM – 5 PM and Sunday from 1 – 5 PM.

**This Best of Georgetown contest is administered by the City of Georgetown. Please note that we do not ask winners to purchase their awards. Should you have any questions, please contact cvb@georgetown.org or call at 512-930-3545.**